Here it is!  This is the first in a series of posts on the worlds weirdest toys!  Believe me there are a lot to choose from!  Look for a new post on a weird toy from the past or present every week!  What would you pick as the world's weirdest toy?  I'm sure you could come up with a list just like I did.  It was even harder choosing which weird toy to feature this week.  Well, here goes...

This toy was actually introduced to be my my oldest brother.  He is several years older and played with a lot of strange toys, so I may have to use him for source material!  I love you big bro!
However, when my brother ended up chipping a tooth with this toy, I learned quickly to stay far away when he or my dad would play with it. 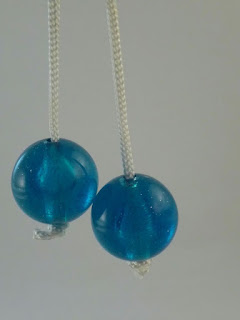 Yes, for those of you who haven't had the joy of meeting this toy, let me introduce you to Clackers!

Clackers are simply two acryllic balls on each end of a string allowing a person to hold the string in the middle using a loop or small handle and "clacking" or bouncing the balls together as shown in the following video...


Quite the brilliant idea, right?  They appeared on the market in 1970.  The concept was loosely based on a bolas which is an Argentinian weapon used in hunting.  The bolas would be thrown at the target animal and the balls would wrap around the animal entangling it's legs so it couldn't flee.

In the case of my brother, it became a tooth chipping device.

Fortunately due to the accumulation of reports of children becoming injured while playing with them, Clackers were taken off the market in the United States.  Injuries occurred by one of the heavy, fast-moving acrylic balls striking a child or by one of the balls shattering and causing abrasions or lacerations.

Clackers resurfaced again in the 1990s and were featured on two different teen comedy television shows on the Nickelodeon channel in 2008.

Today they can be found on several popular online retail websites.

Did you or a family member ever own Clackers in the 1970s?  Do you have any good Clacker stories?  Post them along!
at September 27, 2018

Paula
Paula is a child at heart! She spent several years in the telecommunications industry before deciding to become a full-time mom to her wonderful children! She believes everyone should have a toy chest that represents their dreams and contains their treasures! What's in your toy chest?